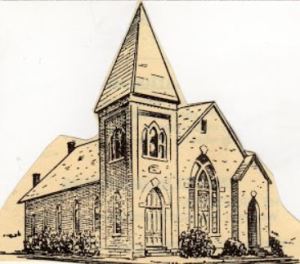 Some transitions are unexpectedly hard. My ex-husband is a pastor, which meant that when we got divorced, I had to find a new church. Or, as turned out to be the case most weeks, I had to (got to?) adjust to a new schedule on Sunday mornings that didn’t involve wrestling small children into nice clothing and hissing menacingly at them to sit still and stop punching each other during communion.

But now my ex is moving on to serve a new church and I accompanied the kids to his last Sunday at the church we had joined, together, seven and a half years ago. It kicked my butt, emotionally.

We moved to Kentucky from Pittsburgh in the spring of 2012 with two kids, one dog, and big dreams of country living. We adored our tiny parsonage home in the tiny town next to the beautiful old church that was the center of our lives. The congregation had repainted every room and stocked the fridge in anticipation of our arrival.

I sang in the choir and the kids played in the Sunday school rooms and we hosted every family in the congregation at our house for dinner during that first year. My son wasn’t even two when we moved and our first Easter in the new church, he memorably locked himself in a small classroom that adjoined the sanctuary. His absence was discovered in the midst of the communion meditation, with his small voice issuing plaintively from behind the door.

Moments after arriving in Kentucky, I was pregnant and so my third baby has been raised and loved by that church family her whole life. The congregation holds so many memories. The willow tree we planted in the yard that was a baby gift from a church member. The numerous bonus grandmothers who bravely took turns holding my fierce wee creature, who shrieked with gusto in anyone’s arms but mine, rocking and swaying her for hours so that I could get work done for a telecommuting gig I had at the time. The beautiful mural on the girls’ bedroom wall, painted with love by an artist in the congregation. My attempts to lead an adult Sunday school class while simultaneously breastfeeding a newborn.

We spent hours in the church basement, making crafts for the holiday bazaar, prepping activities for vacation bible school, and eating casseroles at assorted social gatherings. There were Christmas pageants and Easter cantatas and hundreds of tiny glasses of grape juice.

These are the people who brought us to Kentucky, who drew us here with their big hearts and southern hospitality. I can remember sitting around a table in the Shaker Village dining hall on a cold February evening, feeling the warmth of their smiles as they asked us to come. We didn’t even have to talk about it because we’d already decided that this was home.

In a lot of congregations, a pastor’s divorce would be the end of his time with that church. Articles abound chronicling the collective failure of faith communities to forgive their ministers for the sin of being human. But when our marriage ended, they just held us tighter, with meals for Josh while he found his feet in the kitchen and laps for the kids to snuggle in when I wasn’t in the pews anymore. I held a midwinter party in my new house several months after the divorce was finalized and the first five people through the door were folks from the congregation I no longer attended.

So I guess I shouldn’t have been surprised that tears accompanied the hugs during the after-church potluck luncheon held to send the pastor and his family on their way. New beginnings come at the cost of bittersweet endings. Farewell, goodbye, and amen. Thanks for seven years and a million memories.